In 1997 four ParkShuttles were installed at Schiphol Airport’s long term parking lot P3, to improve the service to airline-passengers and to support Schiphol’s brand image. Each vehicles accommodated 8 seated passengers, 2 standees and luggage. At any time three ParkShuttles were in operation, while one vehicle is charged. When there are no transit requests, the vehicles space themselves to ensure minimal waiting times at each stop. When necessary the vehicle charging was made available by manual override for additional capacity.

During the lifespan of the system several surveys showed great passenger satisfaction and the system proved very reliable. The service was available 24/7, free of charge. Operations were stopped in 2004 after 7 years of operation, where the pilot was intended for 3 years only initially. Installation of the 2nd generation ParkShuttle was seriously considered, but uncertainty in regard to future plans of Schiphol Airport and parking lot P3, as well as the development of air-traffic meant a positive decision could not be taken at that time. 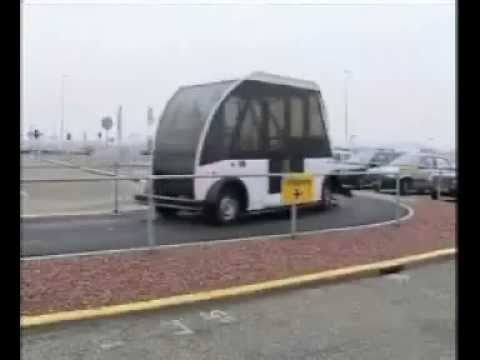